Mu Ko Chang National Park is located in the Gulf of Thailand offshore from the coast of Trat Province not too far from the Cambodian border. It is a marine national park covering an area of 650 km² over 52 Island in Ko Chang Archipelago. The national park is best known for its waterfalls, long trails, viewpoints and coral reefs.

The main island Ko Chang is the only island in Thailand where there is still some proper evergreen forests left on the higher elevations. The coral reefs of the park is an IUCN Category II protected area. The highest peak of the national park is at the summit of Khao Salak Phet in Ko Chang island, around 740 meters asl.

The mainland piers to Ko Chang are 90 km from Chantaburi, 250 km from Pattaya and about 300 km from Bangkok.

The rainy season is May to October with the most rainfall in June to September.

There are around 120 bird species recorded in the national park. Of these, the uncommon one is fairy pitta. Few other interesting birds are great hornbill, Oriental bay owl, moustached barbet, green imperial pigeon, stork-billed kingfisher and Pacific reef heron.

Silvery lutung is a very rare monkey species found in the national park, currently known from only a couple of other spots in the country. Other mammal species are wild boar, crab-eating macaque and Asian palm civet. 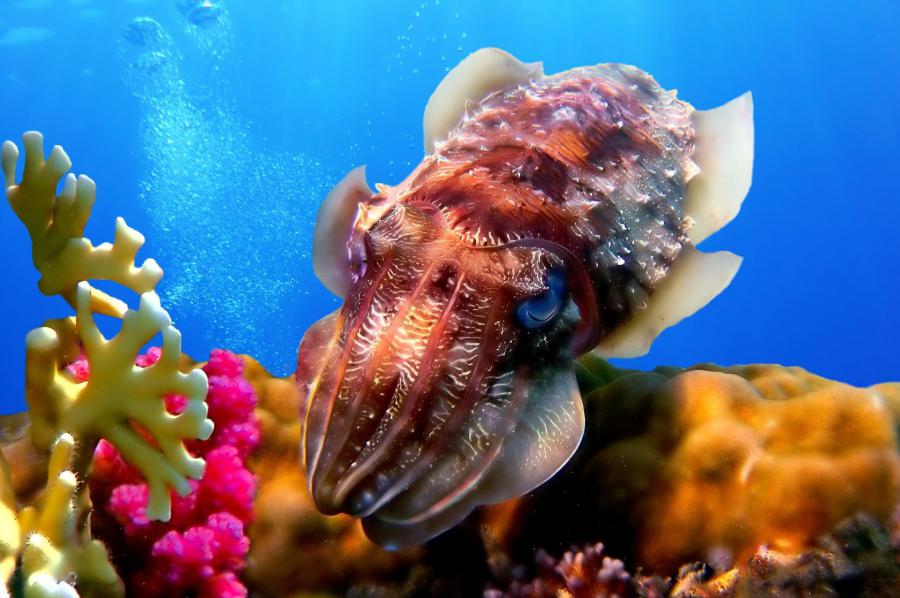 While the park headquarters is on the northwest of the island, the main visitor center and the campground are on the eastern coast of the island next to Than Mayom Waterfall.

The main island of Ko Chang can be reached from two piers right north of the island at the nearest spots on the mainland. These piers have multiple names as ferry companies prefer to use their company name for the piers. When getting to the pier with taxi or other private arrangements, good to know which pier to drop off at.

The ferry shuttles to the island are with large car ferries, operating from 6 am until 7:30 pm, daily and all year round.

There are regular bus services from Bangkok’s Ekkamai Bus Terminal and from Pattaya to the mainland piers.

Once on Ko Chang island, there are private taxi or pickup truck (called songthaew) options to various spots on the island from the main pier or from hotels.

Getting around along the west coast of the island can be done with pickup trucks. These doesn’t operate in any regular route to the east coast, but can be arranged privately. There are also taxi services that can be arranged from hotel or agencies in the island.

Private boat trips can be arranged to the islands from hotels or agencies.

The park is open 24 hours a day all year round.

The main activities in the national park is hiking, either short trails to waterfalls and mangrove forests or longer and more challenging trails deeper inside the forests. There are many waterfalls in the park, most of them easily accessible from the touristy spots, others needs a bit of effort to get to.

Diving/snorkelling in coral reefs is another popular activity in the national park.

There are many restaurants and accommodation options most of the attractions accessible by road. No bungalows available for rent by the national park.

There is a camping ground next to the headquarters along the coast, but no bungalows. Tents can be rented from the visitor center;

There are toilet and shower facilities at the camping ground.

Located right at the south of Kae Bae Beach, it is a nice viewpoint over the sea and surrounding areas. Four smaller islands can be seen from this viewpoint; Koh Yuak, Koh Man Noi, Koh Pli and Koh Man Nok. The viewpoint can be reached by a short stroll from the main road along the west coast.

There are 6 main accessiblewaterfalls in the national park which are spread all over the park. Entrance fee applies to two only.

It is the most popular and easily accessible waterfall from the busy west end of the island, about a kilometer from Klong Prao Beach, signposted well. It is about 600 meters into the forest from the car park and the entrance.

The waterfall has around 30 meters drop, possible to swim in the plunge pool or many other spots along the stream. While the fall have impressive waterflow during the rainy season, it has less flow in the dry season.

Also known as Klong Son Waterfall or with a different spelling as Khlong Jao Lueam Waterfall with several tiers, it is a smaller size waterfall on the northern Ko Chang. The waterfall entrance is about 4 km south from Klong Son Village. The waterfall has water flow all year round, can be a bit tricky to get to during the rainy season because of slippery path. Most tiers are not easily accessible, trails are not clear.

It is possible to swim in one of the pools at the lower tiers.

No national park entrance fee needed for this waterfall, but a scam warning; Cars/bikes can only be parked at a private property, 40 Baht parking fee will be charged. A common practise at many similar attractions where some people take advantage and buy land right at the entrances.

There are no public transportation options to get all the way to Khlong Chao Leuam Waterfall, best to get there with private arrangement or own car/bike.

A smaller waterfall with rocky stream bed and rocky path. It is located about 1 km away from the main road on the east side of the national park, north from the headquarters. The waterfall is not getting much visitors.

No entrance fees applies at this waterfall, there are no shops or restaurants nearby.

Located at the east side of the island near the national park headquarters. It is a series of falls with only one tier easily accessible by a short stroll. With a bit of effort the upper tiers can also be accessed. National park entrance fees applies at this waterfall. 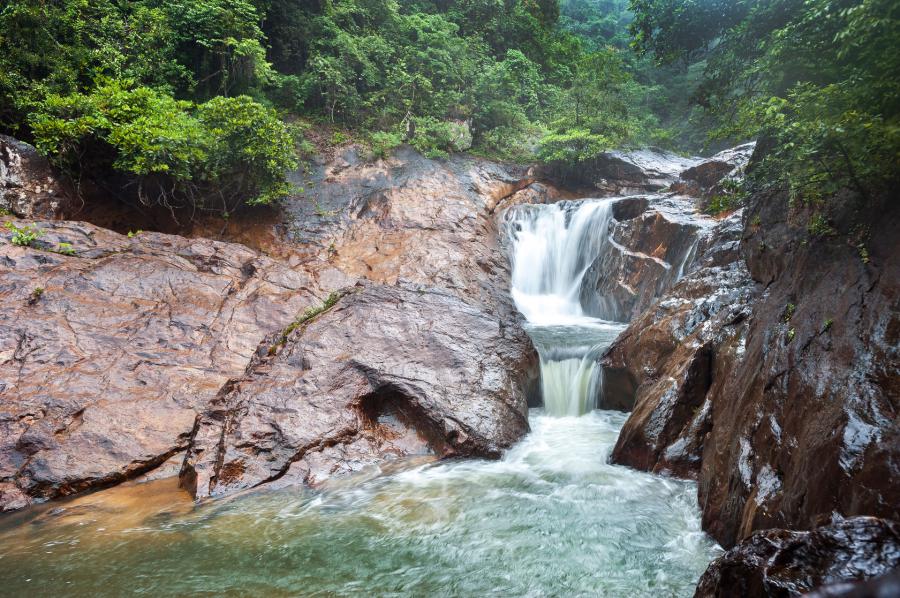 The tallest waterfall in Ko Chang, is located in the southeast of the island west of Salakphet. From the car park of the waterfall, there is a small trail to the waterfall. The path can be unclear, and visitors may end up simply walking upstream the water to get there. It takes about 20 minutes walk to get to the waterfall.

No entrance fees applies at this waterfall, there are no shops or restaurants nearby.

A bit south from Khlong Nung Waterfall 2 km west of Salakphet. It is possible to swim on the ponds along the stream of this waterfall.

Salakphet is the highest peak in Ko Chang Island at 740 meters asl. It can be reached by several trail options either from east or south. One option is from Bangboa to the south, up to the peak for 5 km and from there either continue the very long and extreme route to Nonsi Waterfall or more comfortable route to Salakphet village to the east. Another shorter and circular option to the peak is from Salakphet end.

The peak has 360 degree view over the surrounding areas.

There are few mangrove forests in the park, two of these has boardwalk with possibility to hike into the forest. 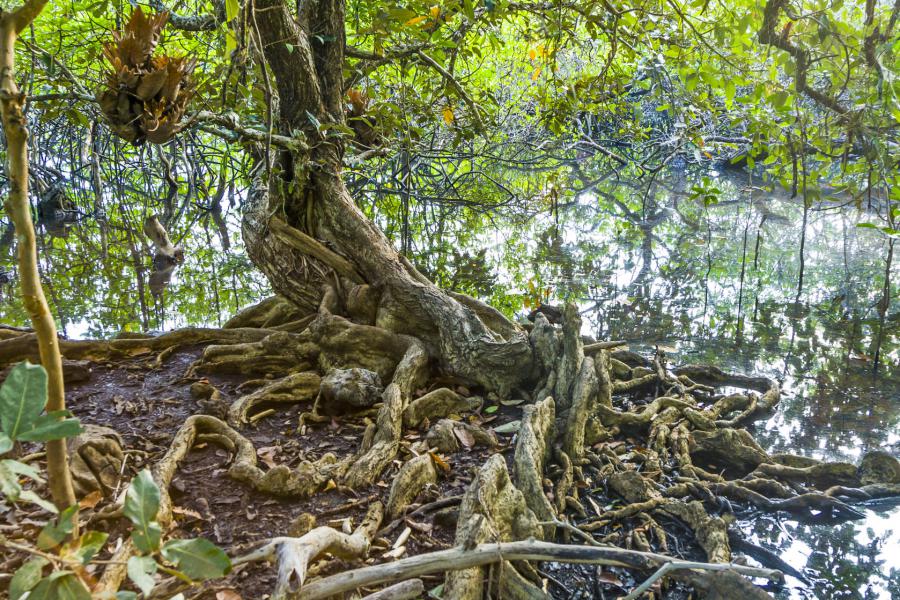 The swamp forests in the main island

Technically it is not inside the national park. A boardwalk through mangrove forest at the south coast of the island. Around 500-600 meters of the boardwalk is a circular walk, another 300 meters boardwalk branches out half way through the circular walk. 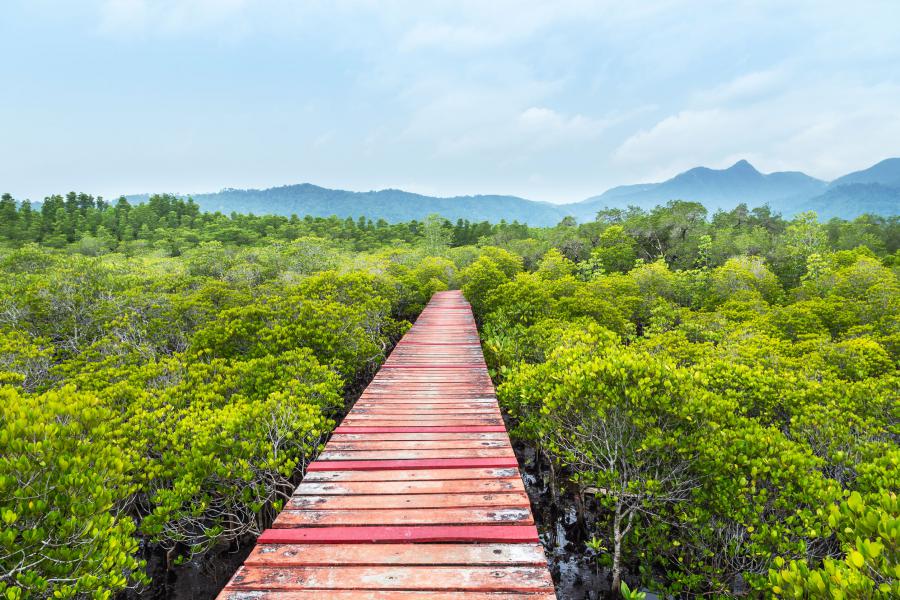 Another mangrove boardwalk not too far from Salakphet, at the east coast of the island. It too is not inside the park. The mangrove forest in Salak Khok is the largest one in the national park. The boardwalk is 860 meters long, it too is not maintained well and need a major repair once every few years.