Due to COVID-19 outbreak, all national parks, wildlife sactuaries and other protected forest areas in Thailand are closed from 25th March until further notice. Some popular tourist destinations like Similan Islands, Surin Islands are within national parks, they too are closed. We will announce from here when the parks reopen.

The forests are mainly mixed deciduous and dipterocarp forest, in deepers areas up on mountains there are few areas with evergreen forests along some cliffs. There are no bigger mammals in the park apart from deer, boars and flying squirrels. Interesting birds are red junglefowl and green peafowl. Some 10 species of flowers bloom on some parts of the park around October to November every year. The highest point in the park is Phu Jongsi at 420 metres.

Despite being small, the park has enough trails and attractions for one or two days stay. The park is mainly known for it's peculiar "mushroom shaped" rock formations, other attractions are viewpoints, waterfalls and a cave. Right behind the visitor center a trail starts uphill and continues along a rock-floor plateau at the ridge of Phu Pha Thoep mountain and than splits in several directions, it leads to most attractions in the area. This easy to moderate trail is signposted but can be a bit confusing when passing the rock group further uphill. On top of the mountain the signposting becomes better.

The visitor center area has few shops, various facilities, a smaller campsite and few bungalows. The bungalows are spacious rooms with single beds on floor, costs 100 Baht per person on availability and can be arranged on spot. The rooms have around 8-10 beds each. There are no restaurants at the visitor center area but it is possible to buy instant noodles from the shops, few stalls sells food only during the week-end and holidays when the park gets more crowded by the local tourists. There are few restaurants few kilometers outside the park along the main road.

Operating from Mukdahan, blue songthaews running along road 2034 right outside the park every 30 minutes, the visitor center area is another 2 km from the road where songtaews passes, there are no public services for last 2 kilometers. It takes around 30 minutes for the songtaews to reach the turnoff road to the park. The last songtaew back to the town may pass by around 16:30. It is also possible to hire tuk tuk from the town for a round trip, 500 Baht or more (2016 price).

Situated within sight of the visitor center area, it is a complex of strange mushroom-shaped rock formations spread out several hundred meters along the ridge up to Phu Pha Thoep mountain. The shape of the rocks are result of at least 100 million years of natural erosion, they are said to be resembling swans, crown, tempes, camel, crocodile and other shapes.

Further up the ridge there is a viewpoint with nice vista of forested hills around, Mukdahan city, the Mekong river and Laos on the other side of the river.

Along the trail path, it is a rock plateau further uphill from the rock group. The area offers many beautiful species of flowers around October to November. Parts of this plateau has very good view over surrounding areas.

A smaller scenic waterfall which is worth to visit only during the rainy season, rest of the year it is completely dry, the forest around looks like jungle during the wet season. The trail is signposted well after the rock plateau to this waterfall. On the way to the waterfall there is another nice viewpoint on the left, signposted well. 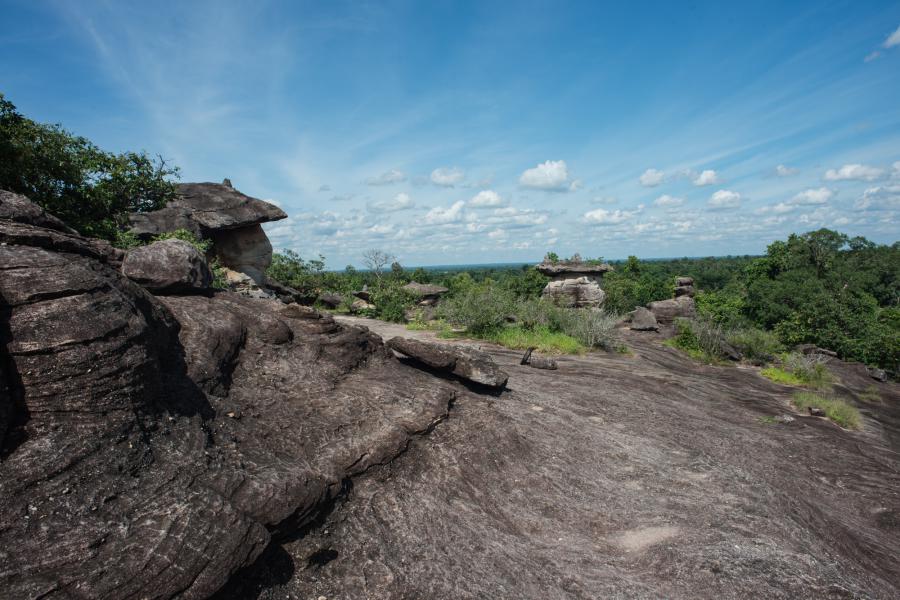