Open the interactive map of Tarutao

Established as a marine national park in 1974, Tarutao National Marine Park is covering 1490 km² area at the southernmost Thailand off the coast at Satun Province in the Andaman Sea. The park consists of 51 islands within two groups; Tarutao Group to he east and Adang-Rawi Group to the west. There are three archipelagos in the park; Tarutao Archipelago, Klang Archipelago and Adang Archipelago. The name Tarutao derives from Pulau Tertua (means "the island of old") which was the original name of the main island.

Tarutao National Marine Park was declared as an ASEAN Heritage Parks and Reserves 1982. The park was also a candidate for UNESCO World Heritage Sites in 1990 but was rejected due to concerns around protection of river and forests, particularly on areas with saltwater crocodiles. The crocodile population is believed to be extinct in the national park and entire Thailand.

Some of common species seen in the park are boar, civet, mouse deer, hornbill, langur, various raptors, reticulated phyton and king cobra. There are also domestic cattle that has adapted a wildlife since decades ago and increasing in numbers. There are estimated 100 different species of birds in the national park.

There are bungalows at Ko Tarutao and Ko Adang but with exception of very few bungalows on one ranger station at Ko Tarutao all bungalows must be arranged online in advance through DNP (Department of National Parks, Wildlife and Plant Conservation) website. Tents and sleeping bags are available for rent on arrival at various campsites from 200 THB a day with no possibility to book in advance.

Crab-eating macaques can be a bit headache for campers on various campsites. To avoid trouble it is wise to leave tent doors and bags open, belonging should be taken out from the bags and spred out in tent so that macaques doesn't have to rip off bags with their claws, but more importantly to quickly find out that there is no food. They only tend to take food or anything that looks like a food package.

Apart from many beautiful white beaches on most islands, the marine side of the park have many great spots for diving or snorkelling. These can be arranged from various agencies at Ko Lipe.

The national park entrance fee is 200 THB for foreginers (children 100 THB) and 40 THB Thais (children 20 THB). Adang-Rawi group are closed for tourism from mid-May until mid-November every year, the main Tarutao Island is open all year round.

As much as the park is known for its natural beauties, the islands are also remembered for its dark history. Back in late 1930s, Tarutao Island had been used to isolate political prisoners. Established in 1936, the first group of 500 prisoners arrived to the prison in 1938 and the number gradually increased to 3000. Followed by coup unsuccessful coup attempts, the revolutionary Bowondet coup group and the Petty Officers' coup group were among the convicts isolated in the island.

When The Second World War broke out, the support from the mainland to the island was cut off causing food shortage and death of many prisoners. The guards and prisoners joined together to raid ships sailing around the island to survive.

Influenced by two prisoned British officers charged of murdering, the raiding party was lead by an American plantation owner blaming the war for loss of his fortune. By the time, the raiding party got so strong that it became a major concern in the area. Until the British forces came to the rescue towards end of the war, around 130 ships were sank by the prisoners killing everybody on board. Until the prison was shut down, nearly a third of convicts sad to have lost their lives due to cruelty from guards, starvasion and malaria.

After the war, farmers and fishermen took up residence on the island, by 1973 the population reached 1000 villagers living mainly at Hak Bay. The population decreased to 17 families after the islands got national park status.

Some villagers that left Ko Tarutao abandoned their domestic cattle behind. These cattle adapted the wildlife and increased in numbers over the decades, they can be seen in herds sometimes.

The most famous destination within the park is Ko Lipe, a small island south of Ko Adang. Ko Lipe was one of the most beautiful islands in entire Thailand but due to unregulated development nearly 90% of the beaches are currently occupied by long-tail boats and the whole Island seems to be a constuction site. Like else where in the country, resorts built on the beaches. Another lost paradise with other words.

Ko Lipe is part of the Tarutao National Marine Park, but since it is a typical overcrowded tourist destination, we don't find anything interesting to write about it from a wildlife conservation perspective.

Saying this, Ko Lipe is the only location in the National Park where long-tail and other type of speed boats can be arranged to visit some of great destinations on surrounding islands for diving, snorkelling and other activities.

Ko Tarutao is home to national park headquarters located at the northwest side of the island on Ao Pante Malacca Bay. The bay has a smaller pier which is the main entry point to the island, a second pier is located around 12 km from HQ at the east coast. Speedboats that operates from Pak Bara to Ko Lipe stops by at Ko Tarutao if the boat captains are notified ahead the time for around 300-400 THB per person.

The HQ area has a visitor center, a small shop and other basic facilities. There are no ATM services on the island, so the visitors are adviced to have enough money on local currency with them.

The transportation possibilities are limited to couple of mini truck style shuttle taxis operating during certain hours. Taxis will also operate for around 300 THB when needed. Limited number of mountain bikes can be rent from HQ or at Mo Lae Bay but not always available. Motorcycles are allowed for personnel only, not possible to rent or borrow any.

There are two ranger stations located along the coast line 4 km and 8 km south from HQ, both have camping areas, restaurants, bungalows and tents available for rent. While bungalows must be booked online in advance for HQ area and the first ranger station, no advance booking needed for very few bungalows at the second ranger station.

Crab-eating macaques, langurs and boars are regularly seen around HQ area. Boars tends to show up more around evening time, sometimes also during day light. A slow and silent night walk along the roads with strong flashlights in hand could be rewarding with very good chanse to see civets and mouse deers.

While the bays with ranger stations are cleaned up regularly, hundres of tons debries and rubbish can be found along the tree roots further inside other remote beaches. These are result of rubbish that has been dumped to the sea from ships further out and flaoted all the way to the islands. Officials clean up these bays only once a year.

Located 4.2 km south from HQ, this bay has a beautiful white beach, a restaurant, bungalows and a camping area. Limited amount of mountain bikes can be rent from the rentaurant. Tents are available for rent on arrival, includes sleeping bag, can't be booked in advance. There are number of nice concreate bungalows with hot shower and fan, available only by booking in advance. The quality of bungalows in this bay is the best ones we have seen in any national park.

Macaques and dusky leaf monkeys are seen very frequently in this bay, boars tends to visit restaurant area a bit after sunset and cattles tends to show up in early morning. In late evening many civets can be seen in the open area, easily spotted with flash-light. There is good chanse to see number of incredible small mouse-deers during a silent night walk couple of km north or south.

Due to very few premises around, this fantastic bay feels less touristy and probably the best and most quite location in the entire island.

The small water stream flowing through the ranger station area gives possibility to see more different types of animals like raptors and phytons only few hundred meter from the restaurant. Phytons are more active during the night, often seen hanging from tree branshes to chase frogs and other animals. Rangers will help you to find them during the day time for as little as 20 THB (early 2015 price). Although sighting is not guaranteed, rangers will show the trees where phytons are seen frequently.

There are no mountain bikes for rent at this ranger station. Few hundred meters up the road there is a start point for a 3 km long trail leading to a waterfall, see on map the first 1.3 km bit of the trail. The only other activity apart from the waterfall trail is kayak activity on the sea, price unknown.

Shuttle taxis operates from this ranger station 8:30am in the morning, to arrive to Ao Son Bay 9am and arrives to HQ before the arrival of first ferry.

Located at the east side of the island 12km from HQ this pier extends a bit out to the sea next to an impressive and photogenic limestone hill off the cost.

Few hundred meter south on the road there is the start point for a 2 km long historic trail. The trail will lead to few historic buildings related to the political prison that was build before the 2nd World War. Along the trail several information signs are setup with some interesting facts about the dark history of the island, in Thai and English.

Accessible by long-tail boats from Ko Lipe, this 6 km long, 5 km wide island is the second biggest island in the national park. The highest point is 690m.

The Island has a ranger station, camping facilities, a restaurant and number of bungalows located at the south tip of the island. Bungalows must be booked and paid in advance through DNP website. Tents are available for rent on arrival only.

The island has few nice trails, one of them a 1 km long trail to a viewpoint with a view over Ko Lipe and another 2.5 km trail through many viewpoint to a waterfall.

This very small island half way between Ko Tarutao and Ko Adang doesn't have any acommodation facilities and can be visited by day trips only. The island has a beautiful beach and known for the most iconic view in the park, the arch formation at the end of the beach. Longtail boats will operate from Ko Lipe to Ko Kai for 3500 THB a day. 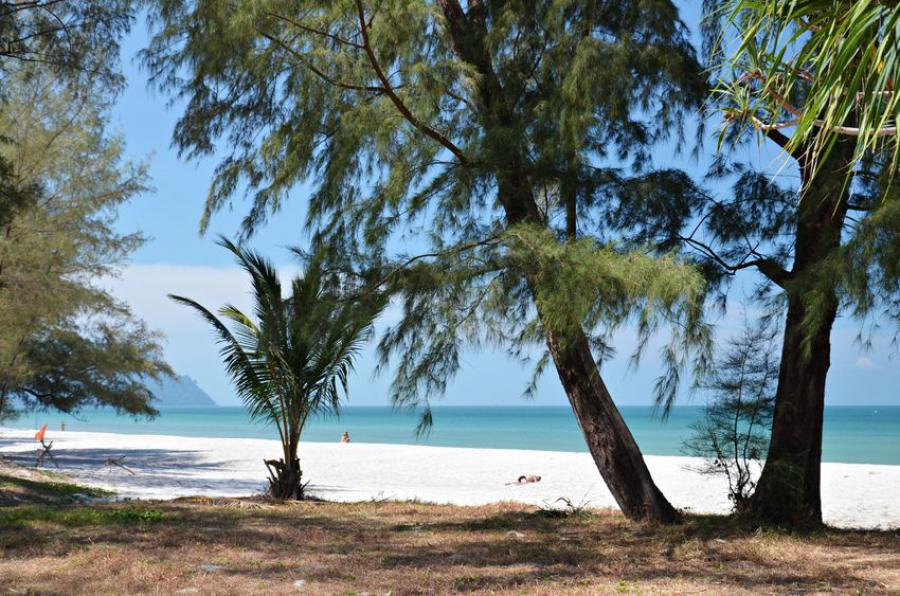 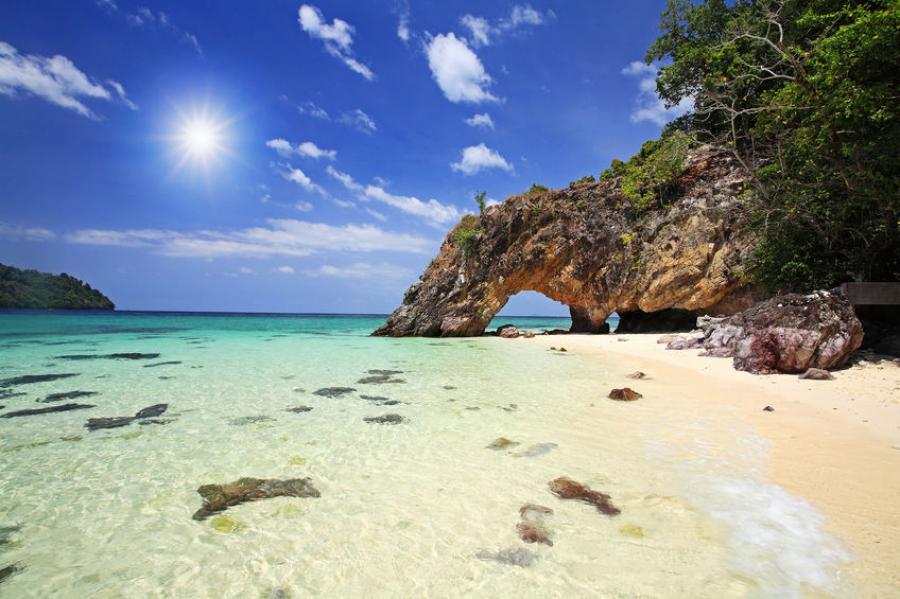 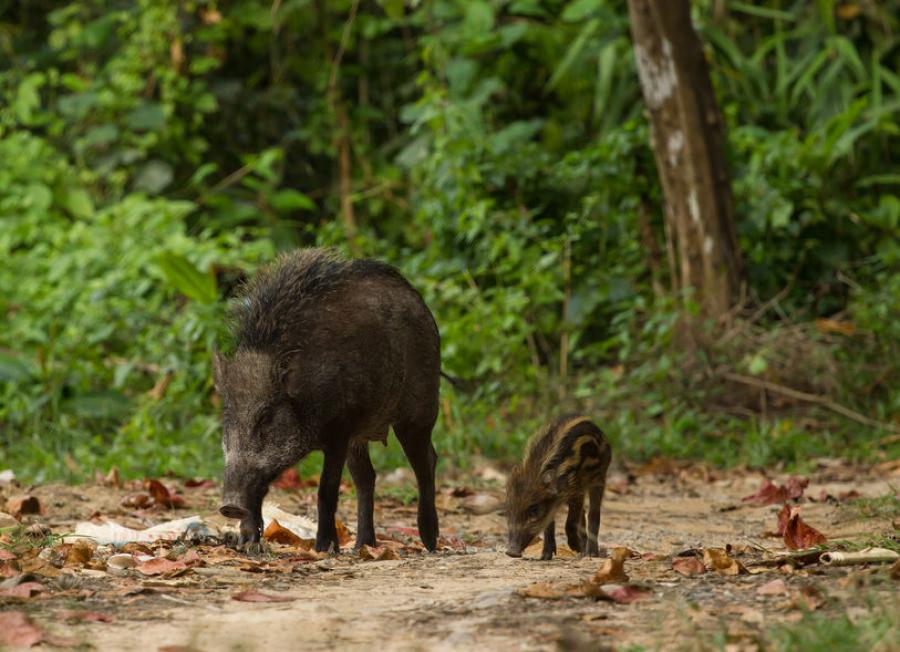 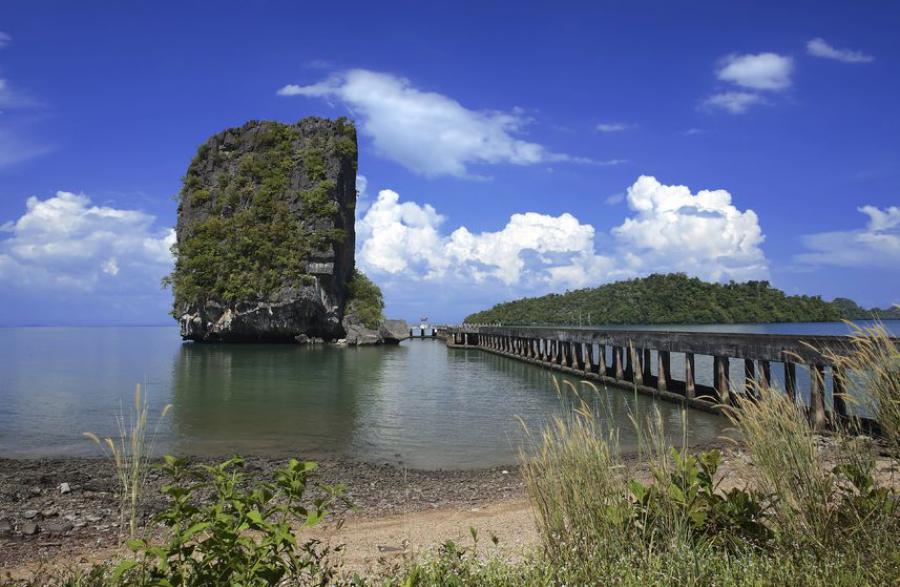 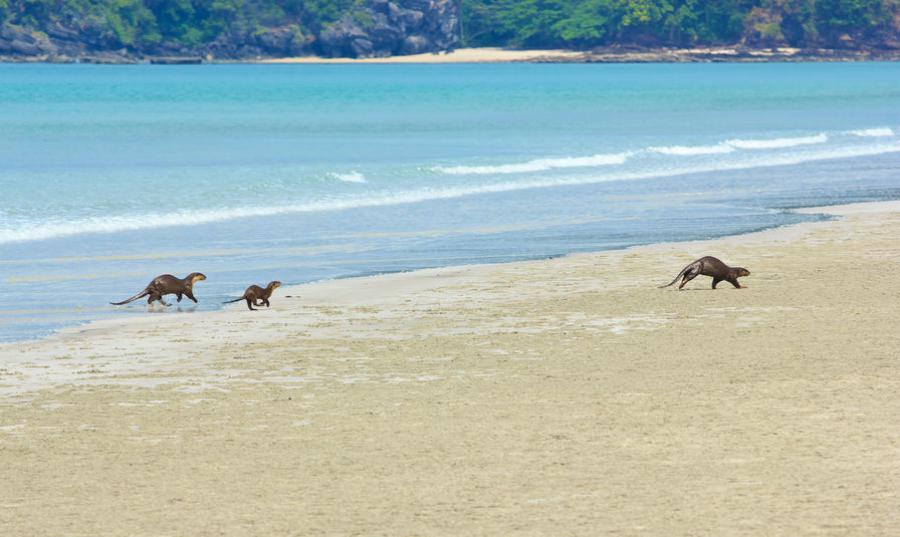