Khao Kho is a very commercialised park with number of villages, hundreds of resorts and other premises through out the park. Situtated in Phetchaburi Province in around 6 hours driving distance from Bangkok, Khao Kho National Park is a very popular holiday destination among local and foreigner tourists. The park is popular for it's cooler weather, morning mist covering surrounding valleys, impressive viewpoints, a huge wind farm, temples, various type of gardens, waterfalls and number of other attractions.

The main mountain Khao Khao where the national park is named after is 1,143 meters asl. The surrounding other national parks are Thung Salaeng Luang National Park to the west and Phu Hin Rong Kla National Park a bit burther north.

Khao Khao area and the entire mountain range south and north till Phu Hin Rong Kla National Park was an ideal place for guerrilla warfare and became a stronghold for Communist Party of Thailand (CPT) back in 70’s. The summit of the park is a memorial ground for victims of the armed conflict between the communists and Royal Thai Armed Forces between 1968 and 1981. Not too far from the memorial ground there is military museum to display vehicles and various items from the war.

Get there & Get around

There are no public transport options to get to Khao Kho from any of the nearby towns. The only option is private transfer, either with own vehicle or with a taxi.

Getting around in Khao Kho is also not possible without a car, the distances between attractions are relatively big.

Khao Kho tends to get very busy during the week-end and holidays. Specially during the December week-ends the traffic can be misarably slow along the main roads.

The nearest airport is in Phitsanulok, about 120 km north/west from Khao Kho, the road to the airport is over a montane area.

During the colder winter months from November to December, the visitors are recommended to have warm cloths as the temperatures can be quite chilly in the night, early morning and early evening. For the rest of the year, perhaps a sweater would be nice to take with.

There are good number of resorts along the main roads in Khao Khao. There are also couple of camping grounds for people who wish to set up a tent.

The highest point at Khao Kho area, 1,143 meters asl. The summit area has a memorial and a military museam, 1.3 km apart. The road to the summit is a narrow and circular one way road that starts end ends from road 2196. Entrance to this road is from the southern end, do not enter from the northern end like we did when exploring the area ;)

A mainly outdoor, with a smaller indoor museum displaying military vehicles and other items. The ourdoor bit has number of aircraft, helicopter, heavier war machinery and various vehicles used during the war against the communist insurgents from 1968 until 1981. 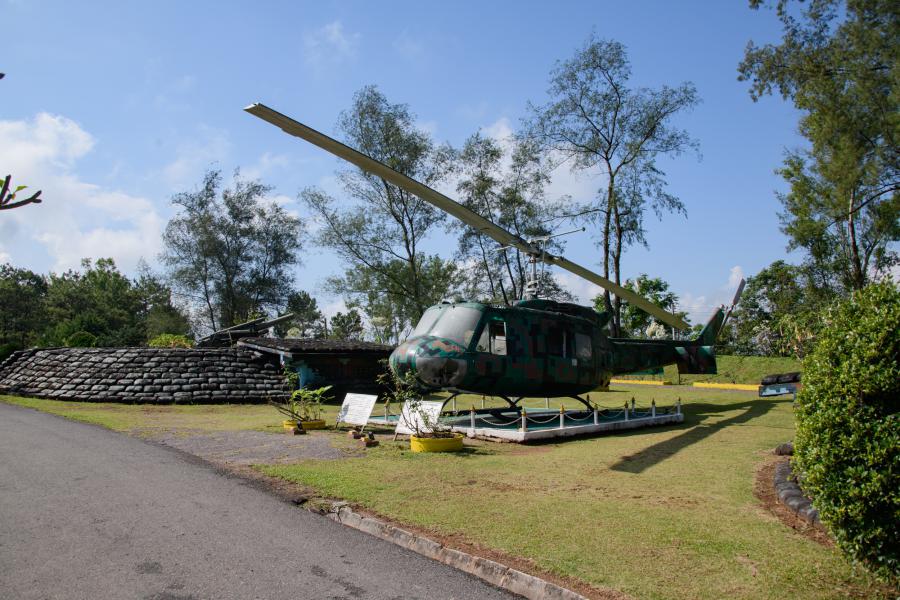 A war museum displaying military vehicles and other items

A marbled memorial raised to honour all lost civilian and military lives during the war against communist movement from 1968 to 1981. It is at the summit of Khao Kho, which is the highest point in the area.

Situated along the main road through Khao Khao, with very nice view point facing west and market stalls along the road.

A wind farm with the largest wind turbines in Thailand, 24 turbines with each turbine 110 meters tall, generating total of 60 MW power. The wind farm is at around 1,020 meters asl. 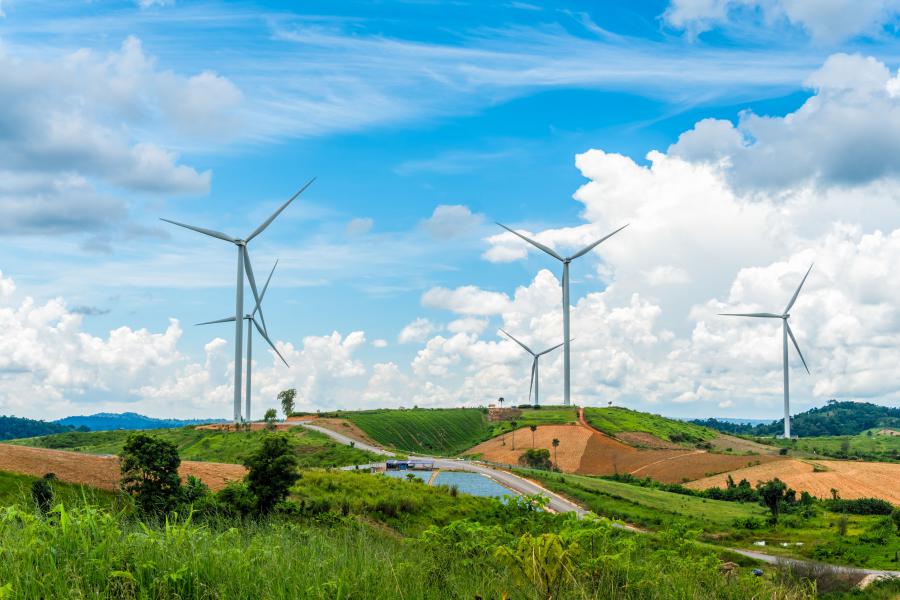 Khao Kho Wind Farm is a destination in the park

The wind farm area is accessible by shuttle busses from a local market, 40 Baht per person. The busses leaves quite frequently, drops off passengers at two different stops, of which the first one is Black Diamond which is a cafe and garden with some decorations for kids. The second stop is another local market.

There are couple of view points along the routes that the shuttle busses takes.

Located at the wind farm, it is a cafe and resort, with smaller flower garden, decorated for kids. Here you will find around 1.9-2 meters tall teletubby dolls and a playground. The shuttle busses drops visitors at this cafe as a first stop.

Pino Latte is one of the most visited attractions in Khao Kho area, for most visitors a must see place. At an elevation of 920 meters asl, it is a very popular café and restaurant with a very good view east, north and south. The view north is an even higher montain summit at around 1,300 meters asl while other directions are lower mountains and valleys mostly facing Lom Sak District of Phetchabun. 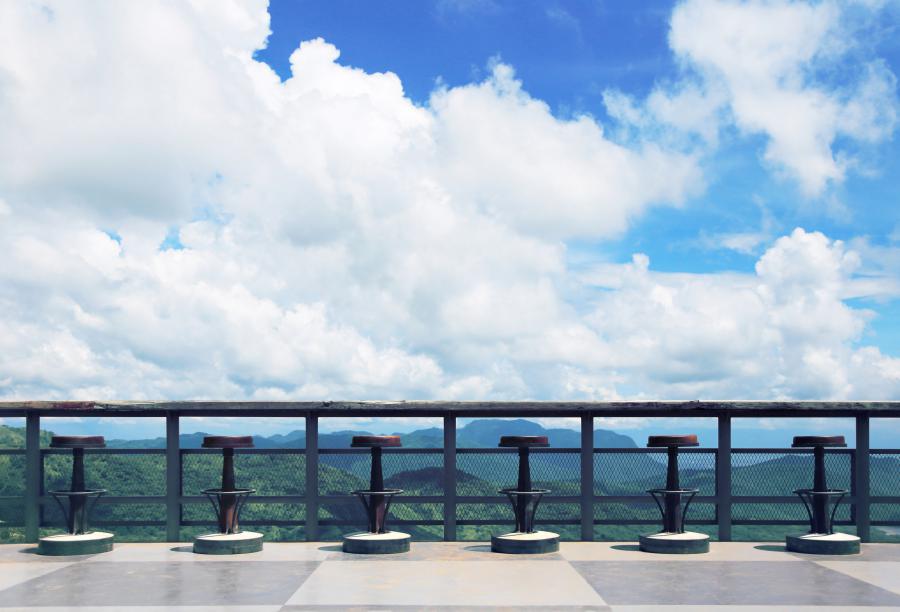 The café/restaurant area is quite big and busy even in a regular working days. The price level even for a simple coffee is quite expensive compared to other cafes in the area, with a simple americano at around 80 Baht. They serve both Thai and western food, icecream, coffee, tea, beverages and pastries.

Pino Latte is accessible by quite a steep and narrow road north from Highway 12 between Lomsak Disrict of Phetchabun Province and Phitsanulok.

Built in 2004, Wat Phra That Pha Son Kaeo is a very popular monastry and temple. For most people an obvious place to stop by on way out from Pino Latte, just 1.5 km away at an elevation of 800 meters asl. 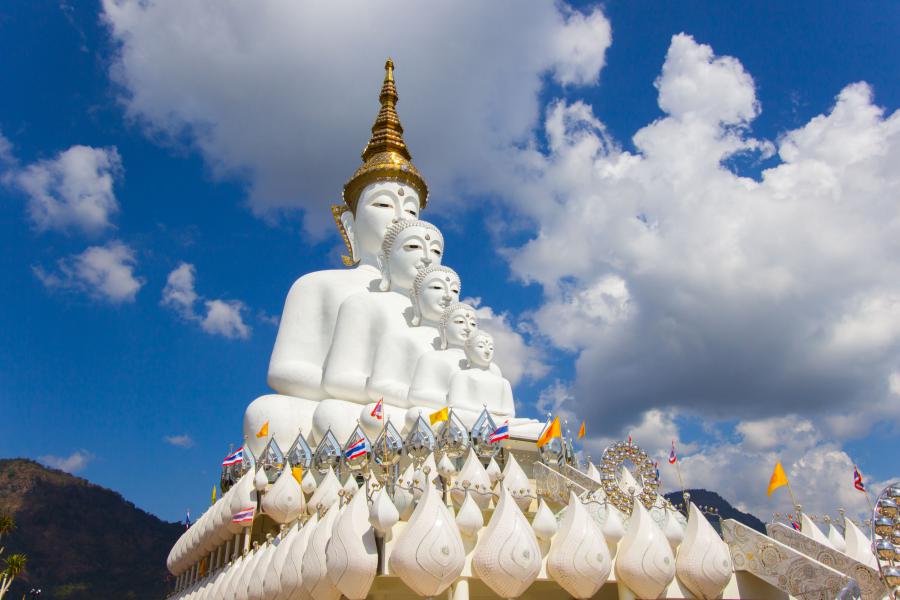 Wat Phra That Pha Son Kaeo, not too far from Pino Latte

The main pagoda and various buildings are of modern design, decorated with around 5 million colorful mosaic tiles and pottery items. On the temple grounds there are also 5 large sitting buddha statues in white with an iconic view.

The temple grounds have a good view over the surrounding areas.

The main attraction of Khao Khao National Park, it is at the east end of Khao Kho. The waterfall is easily accessible by car, around 400 meters convinient walk from the car park of the waterfall, the trail to the waterfall is not steep. 100 Baht entrance fee for foreigners. 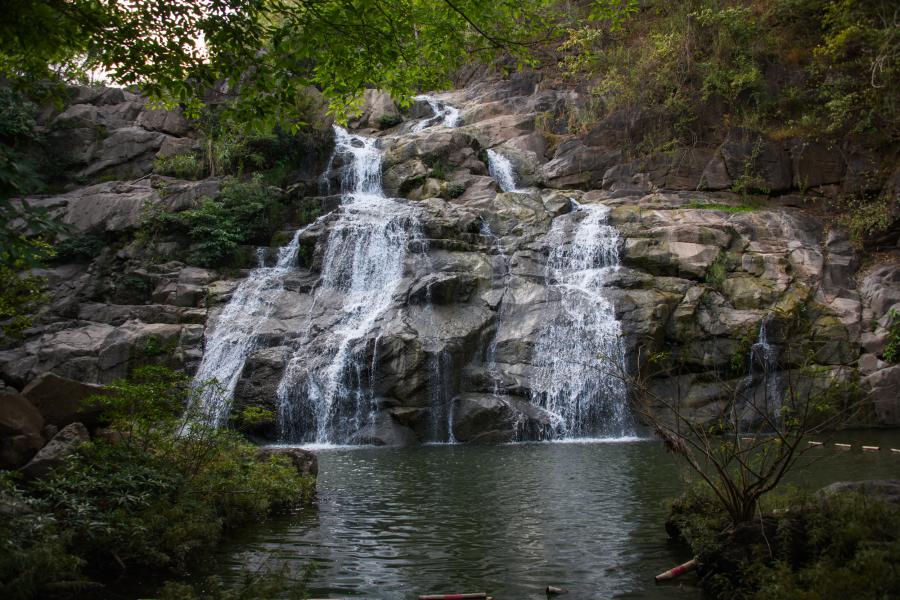 Than Thip Waterfall at southern edges of the national park

The biggest and most impressive garden in the area. Although it is a resort, it is possible to enter the resort grounds for a fee of 100 Baht per person. The resort grounds is on the top of a mountain ridge with garden spread out downhill in most directions, pretty good view from the resorts own viewpoint.

The resort architecture is of European style, the style reflects to every small detail like the different premises, the garden, walls etc. The resort has also a restaurant.

Located at around 800 meters asl, it is a resort and adventure park. The adventure park side offer various activities like sliding on air, water activities including canoeing/rafting, speed kart racing, activities for chindren of all ages, climbing, shooting arrows with bows, and many more. Each activity charged separately.

A smaller fruit, vegetable and flower garden for a shorter stop.